Good news for nut lovers: Eating at least one serving of walnuts per week may drop our chances of a cardiovascular-related death by 50%. However, walnut consumption may only drop our cholesterol levels about 5%. How could we get a 50% drop in cardiac mortality from just a 5% drop in cholesterol? Walnuts must have […] 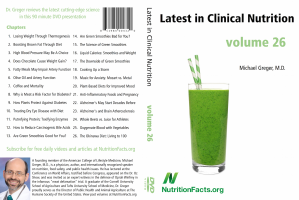 Smoothies have been one of the most requested topics, but for years there seemed to be little pertinent research. I was surprised when I reprised my search this year to find hundreds of studies, so it’s smoothie-time! I rarely do such long contiguous video series any more, but I had neglected the topic for so […]

View my new live presentation here: Food as Medicine: Preventing and Treating the Most Dreaded Diseases with Diet Every year I scour the world’s scholarly literature on clinical nutrition, pulling together what I find to be the most interesting, practical, and groundbreaking science on how to best feed ourselves and our families. I start with […]

Note from Dr. Greger: In short, we found detectable amounts of lead in samples of Frontier, KAL, and Whole Foods brand nutritional yeast, but the lead levels were so low that they all comply with the exceedingly (and justifiably) strict California Prop 65 standards. Still, I advise pregnant women who eat more than a third […]

Dioxins Stored in Our Own Fat May Increase Diabetes Risk
nutritionfacts.org

Finding higher diabetes rates among those heavily exposed to toxic pollutants—such as those exposed to Agent Orange, chemical plant explosions, toxic waste dumps, or heavy metals in fish from the Great Lakes—is one thing. Would the same link be found in a random sampling of the general population? Yes. A strong dose-dependent relationship was found […]

Why Deep Fried Foods May Cause Cancer
nutritionfacts.org

In the latest study on dietary patterns and breast cancer risk among women, healthier eating was associated with eliminating three-quarters of the odds of breast cancer, whereas less healthy eating was associated with up to nearly eight times the odds. Included in the unhealthy eating pattern was the consumption of deep-fried foods, which have previously […]

One in eight American women will be diagnosed with breast cancer in her lifetime. There are a number of compounds in plant foods that may protect against breast cancer by a variety of mechanisms. I’ve talked about the benefits of broccoli, flaxseeds, and soy foods before (See Breast Cancer Survival Vegetable,  Flaxseeds & Breast Cancer […]

In my video Treating Asthma With Fruits and Vegetables, I highlighted a landmark study on manipulating antioxidant intake in asthma. The study found that just a few extra fruits and vegetables a day can powerfully reduce asthma exacerbation rates. If the antioxidants in the plants are ameliorating asthma, then why can’t we take antioxidant pills […]

How Fruits and Vegetables Can Treat Asthma
nutritionfacts.org

In my video Preventing Asthma With Fruits and Vegetables, I highlighted an international study of asthma and allergies involving more than a million kids. The study found a consistent inverse relationship between prevalence rates of asthma, allergies, and eczema and the intake of plants, starch, grains, and vegetables. Researchers speculated “over a decade ago that […]

How Fruits and Vegetables Can Prevent Asthma
nutritionfacts.org

Asthma is the most common chronic disease in children and the prevalence is increasing around the world. Despite this, most research dollars are spent on adult chronic disease. “One might ask,” a group of researchers posited “whether this is because our politicians and senior administrators feel themselves to be more likely to suffer from the […]

Why do food companies sell junk? Because unhealthy commodities are highly profitable. This is in part because of their “low production cost, long shelf-life, and high retail value,” which create perverse incentives for industries to market and sell more junk. In a study highlighted in my video, Taxpayer Subsidies for Unhealthy Foods, researchers at the […]

How Contaminated Are Our Children?
nutritionfacts.org

In a study highlighted in my video, California Childen Are Contaminated, researchers analyzed the diets of California children ages two through seven to determine the cancer and non-cancer health effects from food contaminant exposures. It turns out food may be the primary route of exposure to toxic heavy metals, persistent pollutants, and pesticides. “Though food-borne toxic […]

Many studies have shown that calorie restriction, without malnutrition, can increase lifespan and lower the risk of age-related diseases, such as cancer. However, for many people, calorie restriction clearly has its drawbacks. In the classic Minnesota Starvation Study, many of the volunteers suffered a preoccupation with food, constant hunger, binge eating, and lots of emotional […]

Thanks to advances in modern medicine, we are living longer lives, but we’re doing it by lengthening the morbidity phase. In other words, we live longer, but sicker, lives (see my video: Americans Are Live Longer, but Sicker Lives). So, traditional medicine increases the number of old people in bad health. Ideally, though, we’d extend lifespan […]

It was Adolf Hitler who coined a propaganda technique he called, “The Big Lie,” arguing that people may be more likely to believe colossal untruths, because they would not believe that others could have the impudence to distort the truth so infamously, so in the big lie there is always a certain force of credibility. […]

Why Do Heart Doctors Favor Surgery and Drugs Over Diet?
nutritionfacts.org

When he was a surgeon at the Cleveland Clinic, Dr. Caldwell Esselstyn Jr. published a controversial paper in the American Journal of Cardiology, highlighted in my video, Fully Consensual Heart Disease Treatment, noting that heart bypass operations carry significant risks including the potential to cause further heart damage, stroke, and brain dysfunction. Angioplasty isn’t much […]

In my videos, Phytates in the Prevention of Cancer and Phytates for Rehabilitating Cancer Cells, I described how phytates in beans may be the reason why legumes are so successful in preventing cancer and re-educating cancer cells. What about phytates for the treatment of cancer? Colorectal cancer is the second leading cause of cancer death […]

Colon Cancer Prevention: Is it the Fiber or the Phytates?
nutritionfacts.org

Dietary factors are considered the most important environmental risk factors for cancer. Within recent years, a large number of naturally occurring health-enhancing substances of plant origin known as phytonutrients have been recognized to have beneficial effects on certain cancers. Beans, chickpeas, split peas and lentils are packed with all sorts of wonderful nutrients, but the […]