How to Cut Breast Cancer Risk in Half
nutritionfacts.org

One of my favorite cancer-specific charities, the American Institute for Cancer Research, lauds the China Study and the documentary Forks Over Knives, with which they share the same bottom-line message: The healthiest diets are those that revolve around whole plant foods. They then translate that advice into their Ten Recommendations for Cancer Prevention, featured in my video […]

What to Eat and What to Avoid to Protect Against Kidney Cancer
nutritionfacts.org

58,000 Americans are diagnosed with kidney cancer every year, and 13,000 die. And the numbers have been rising. Approximately 4 percent of cases are hereditary, but what about the other 96 percent? Historically, the only accepted risk factor has been tobacco use, but cigarette smoking has been declining. So what’s going on? Nitrosamines are one […]

In response to concerns raised about the toxicity of Monsanto’s roundup pesticide, which ends up in GMO foods (See Is Monsanto’s Roundup Pesticide Glyphosate Safe?), Monsanto’s scientists countered that these in vitro experiments used physiological irrelevant concentrations, meaning dripping roundup on cells in a petri dish at levels far above what would be realistically found […]

Why do constipated women appear to be at higher risk for breast cancer? The results of a 1989 study out of the American Journal of Public Health suggested a slight increased risk of breast cancer for both decreased frequency of bowel movements and firm stool consistency. Women who had three or more bowel movements a […]

The Dietary Link Between Acne and Cancer
nutritionfacts.org

Acne is an epidemic skin disease of industrialized countries, reaching prevalence rates of over 85 percent of teenagers. In nearly half of American men and women, acne even continues after adolescence and into the third decade of life. Acne is considered a disease of Western civilization, as in places like Okinawa, Japan, acne is rare or even […] 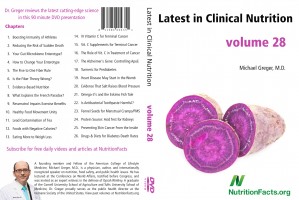 Vitamin C is no stranger to controversy. It took 40 years between when citrus fruits were shown to cure scurvy in the 1700’s and their widespread application. Is it possible we’re in the midst of a similar 40 year lag between vitamin C discovery and implementation? Research in the mid-70’s by Linus Pauling (considered the greatest […]

The low incidence of bowel cancer in India is often attributed to natural antioxidants such as curcumin, the yellow pigment in the spice turmeric, used in curry powder. However, it is important to remember that the benefits of a diet are seldom produced by a single ingredient in that diet. For example, diets rich in […]

Why Deep Fried Foods May Cause Cancer
nutritionfacts.org

In the latest study on dietary patterns and breast cancer risk among women, healthier eating was associated with eliminating three-quarters of the odds of breast cancer, whereas less healthy eating was associated with up to nearly eight times the odds. Included in the unhealthy eating pattern was the consumption of deep-fried foods, which have previously […]

One in eight American women will be diagnosed with breast cancer in her lifetime. There are a number of compounds in plant foods that may protect against breast cancer by a variety of mechanisms. I’ve talked about the benefits of broccoli, flaxseeds, and soy foods before (See Breast Cancer Survival Vegetable,  Flaxseeds & Breast Cancer […]

Colon Cancer Prevention: Is it the Fiber or the Phytates?
nutritionfacts.org

Dietary factors are considered the most important environmental risk factors for cancer. Within recent years, a large number of naturally occurring health-enhancing substances of plant origin known as phytonutrients have been recognized to have beneficial effects on certain cancers. Beans, chickpeas, split peas and lentils are packed with all sorts of wonderful nutrients, but the […]

It is estimated that the human body consists of ten or so trillion cells. Almost all of these cells get turned over within approximately 100 days. That means we’re like a new person every three months. We reinvent ourselves physically. And since we’re physically made of air, water, and food—those are essentially the only inputs—we […]

The USDA removed their online antioxidant database of foods, “concerned that ORAC values were routinely misused by food and dietary supplement manufacturing companies to promote their products.” Indeed, supplement manufacturers got into my-ORAC-is-bigger-than-your-ORAC contests, comparing their pills to the antioxidant superfood du jour, like blueberries. We know there are lots of bioactive compounds in whole plant […]

Why are Cancer Rates so Low in India?
nutritionfacts.org

It is estimated that many tumors start around the age of 20. However, detection of cancer is normally around the age of 50 or later. Thus, it takes cancer decades to incubate. Why does it take so long? Recent studies indicate that in any given type of cancer, hundreds of different genes must be modified […]

8 Simple Ways To Significantly Lower Your Chances Of Ever Getting Cancer
www.yahoo.com

When it comes to preventing cancer, your best defense may be common sense: Up to 40% of cancers are caused by “lifestyle behaviors” like smoking, eating too much, and not exercising, according to a 2011 study in The British Journal of Cancer. “Most …

In a groundbreaking laboratory study, a research team at Sylvester Comprehensive Cancer Center at the University of Miami Miller School of Medicine has found that a non-toxic oral agent that is also consumed as an over-the-counter dietary supplement in …

5 Things Everyone Can do to Reduce Their Risks of Cancer
www.onegreenplanet.org

Though many foods are known to be “anti–cancer” foods, there is not one food out there that can prevent us from cancer. Yes, there are foods that show to fight against the mutation of cancer cells, and there are certain factors we know increase cancer … The effect of fruit and vegetable intake on the development of lung cancer: a …
www.nature.com

The 2007 World Cancer Research Fund/American Institute for Cancer Research expert report 'Food, Nutrition, Physical Activity, and the Prevention of Cancer: a Global Perspective' concluded that fruits probably protect against lung cancer and that there …

7 Natural Foods That Will Reduce Your Risk Of Cancer
www.nigerianbulletin.com

Soy products such as soy milk and soy beans are very valuable anti–cancer foods. They are rich in phytonutrients (such as isoflavones) which inhibit angiogenesis (formation of new blood vessels) thereby impairing tumour growth. Bile acids produced by …